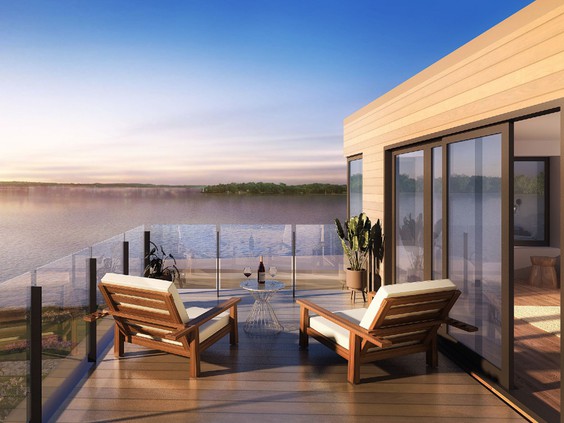 Waterfront living in the Kawarthas made easy

There was a time when a trip from Toronto to Fenelon Falls or vice-versa took well over two hours and possibly more, but that has all changed with improvements to Ontario’s 400-series highways.

Today, barring traffic congestion, it takes less than two hours, which explains why starting next year and into 2023 there will likely be a host of commuters making the trip into the GTA from their new home located in a development on Cameron Lake called Fenelon Lakes Club.

With a move-in date expected to start taking place sometime next year, the complex, which is being built by MDM Developments will contain 66 condominium units, 10 waterfront townhomes and 10 ‘bungaloft’ units with pricing starting from the mid-$700,000s.

Sales have been brisk, with 85 per cent of Phase One (Balsam House) selling out in less than three weeks and as of this month, Phase Two (Cameron House) at 65 per cent sold out.

As for the condo units themselves, some will include dens, and all will offer either balconies or terraces with oversized sliding doors, nine-foot ceilings, open-concept kitchens with quartz countertops and double-basin undermount stainless steel sinks, and bathrooms with double vanities.

With suite sizes ranging from 1,000 to 2,500 sq. ft. there are a number of pluses associated with the development.

Aside from amenities such as an outdoor pool and entertaining space, racquetball courts, fitness centre, games room and fireside lounge, there is also the fact it is a waterfront community.

According to the developer, “Fenelon Lakes Club is flanked by 355 feet of waterfront with western exposure, enabling residents to experience expansive lake views from the comfort of their homes.”

Doug Gray, president of MDM, said that “knowing there is little on the market for boutique waterfront residences, we wanted future residents to experience the ultimate in cottage living without the hassle of actually owning one.”

As for the age of most residences, he anticipates a definite mix ranging from those with young families to the recently retired and beyond.

MDM partner Luke Wilson said that “with the pandemic came a shift in typical purchasing habits we’ve seen dominate the market over the last decade. In the last year-and-a-half we have seen a heightened demand for outdoor space, and waterfront properties afford residents with the best of both worlds: condominium living and proximity to nature.”

Gray adds that COVID-19 has definitely made things a little different in the sense that “it’s made people want to get out of the city, a little sooner.”

It’s also not surprising that sales of this MDM development have gone well and that is due to the fact a body of water is involved.

Aside from young families escaping the city, a prime buyer, says Gray, would be a cottager who moved near a town like Fenelon Falls 20 years ago and for numerous reasons does not want to relocate.

“It is their home now. They curl, they play bridge, and they have their friends, but they don’t want to take care of a cottage anymore,” he says. “This (Fenelon Lakes Club) provides a nice downsizing housing option for local residents.

“The smaller towns around Ontario have recognized that this kind of housing is important.”